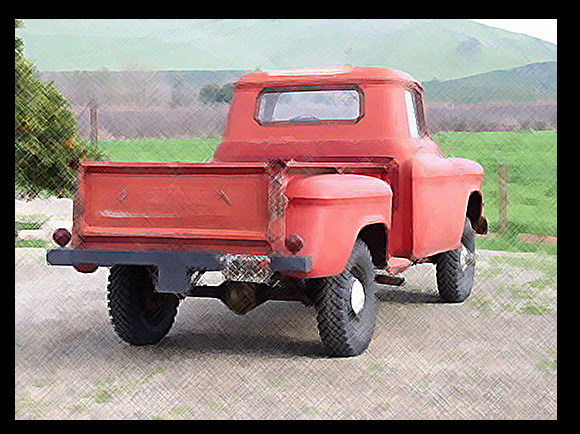 Being from a rural background, I learned to drive early. Vehicles were no mystery and extra drivers were always needed to fetch, haul or pick up others. While it is said (I forget who said it) you should never learn to drive from your parents, I learned mostly from my dad. He  wasn’t much of an explainer and certainly didn’t repeat himself. You had to get it all the first time, shift, turn, signal, first, second, third.  Driving with my dad was a calming, if silent experience. I think if I’d drove over a cliff, he would have shown no emotion, maybe remarked,”Let’s see now, this doesn’t look so good.”

On the other hand, driving with my mother was a harrowing experience. She seemed to require as many hands as a Hindu god, clutching the seat, the door handles (no seat belts in those days!), the arm rests, anywhere. Then there was the audible gasp every 5 minutes and the stamping braking motion when she thought I wasn’t going to stop in time. She could have made a nervous wreck out of Mario Andretti. She certainly made one out of me. i wished I’d had a more phlegmatic temperament like my sister, then it probably would have rolled right off me.

She may have come by her terror of driving naturally. My parents were in a car accident (thankfully no one was seriously injured) and ever since she was jumpy both behind the wheel and as a passenger.

Like everyone else, I took driver training during high school. I wonder if they still show those accident carnage photos or videos. Those were enough to put you off driving for good. I received my drivers license and then proceeded to not drive for about the next 15 years. I got behind the wheel again but I can’t say I enjoy driving or ever will. It is strictly a have-to not a want-to. If you want to get your kid to figure skating class at 8 a.m. on a Saturday morning and the rink is across town, then you had better drive. The joy of driving a pick-up truck down a dusty country road when you are 11 is not the same as sitting in traffic on the verge of road rage.

Of course there are many things in life we dislike to do but we still have to do them anyway. Suck it up and just do it.  I am always surprised when I hear what others fear – spiders, snakes, flying, crowds, rejection, other people. The thing is not to avoid the things we fear but to face them head on and hopefully overcome them. Even if you can’t master fears completely, it still counts for something as long as you tried.

Just don’t ever drive with my mother.